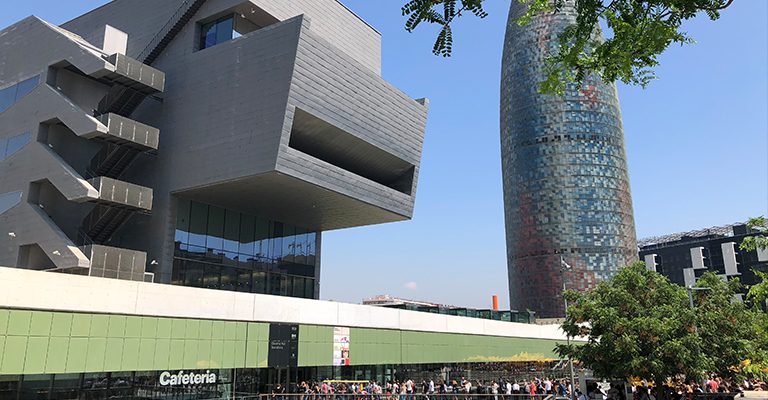 For us at Demodern, It has always been an important part of our work to offer our creatives and geeks the best possible opportunities for furthering education, like visiting conferences and congresses.. Thus we set our sights at OFFF in Barcelona. That's why 11 of our peepz went to Spain to get inspired by great talks and to enjoy the mediterranean atmosphere of the city. And the best way to enjoy this is on the rooftop of a hotel with a pool and great views of the famous Sagrada Familia and the Torre Glòries which has some … phallic properties …

Waiting in queues - that’s what we are good at now

Let's talk about the OFFF Conference 2018 now! Honestly, we could say that we spent at least half of our time in queues. Practicing patience so to say... Starting with picking up our badges at the entrance followed by the queue at the open room (also called “the tent”) and the main stage (Roots) to the queues in front of the food trucks or toilets - the waiting was a bit annoying relative to the prize of the conference.

For sure, one could say now: The Germans, always complaining, but it was really not sooo cool that we’ve missed one or the other talk because of too many people in queues. Tiny consolation: You could follow the talks from Roots Stage also outside - they were broadcasted live to a big screen in front of the Museu del Disseny de Barcelona where one could at least eat and drink. Inside the conference rooms this was not allowed. You had to leave the rooms for food and drinks and one could only hope to get in again... So much for the negative parts of the conference, but let’s get positive now and talk about: The Talks!

Under the name of "Oily Furry Fingers Festival (O.F.F.F)" you could watch the talks on the Roots Stage this year - the Open Room was called the "Optimistic Freckled Friends Festival (O.F.F.F)". We would have simply called it "Only For Forbearing Friends" (O.F.F.F.)...

The speakers - let's talk about design

The OFFF 2018 should be really proud of its good speakers. In addition to the usual sales events of Adobe (obviously the main sponsor of the conference), Facebook, Dropbox, well-known designers, illustrators, motion designers, creative directors, animation geniuses etc. conquered the stages.

Tom Muller, Digital Designer and Creative Director at helloMuller, talked about "Designing Fiction". He revealed some insights about the making of the cover for the “Suicide Squad” comics.

Jeff Boddy, Head of Design and Creative Director at The Mill Chicago, gave us some different insights into the agency's daily business, focusing less on the mega projects and more on how to achieve good results in spite of little money and time and how important it is for them to have a team with a good mix of generalists and specialists to receive these results. The commercial "Family Greatly" for KRAFT for example they brought to the screens of US Superball viewers within a day. Although everyone with many years of agency experience are already familiar with this approach, it is always nice to also hear something like this from an experienced creative person from a top agency. We sit in the same boat after all.

Chris Bjerre - the San Francisco based multi-talent wanted to draw robots since he was a child, and blew us away with his work on "Ghost In The Shell" and Bladerunner*. Chris will create the main title for the OFFF 2019 by the way.

*Editor's note: Unfortunately, none of his sequences actually made it to the final movie. (what a pity)

In the tent we had a look at the guys from Animade. After a video fly-through of their office in London, they provided us funny animated films for different brands.

Granted, a lot of patience was needed during the 2-hour talk by Gavin Strange and James White, better known as Signal Noise. Unfortunately, both keynotes (summarized on the OFFF) had already been seen and the length did not necessarily make them any better. Fun fact: James came by the next day to sign a Wall-E poster he created.

Pokras Lampas from Russia did convince us with his work, but unfortunately the talk was quite unemotional, which made it hard to follow him. He was spotted at the entrance in the evening at the After Show Party (you say ...)

PressTube provided us a cute commercial for Mr Sub, editorial artist Malika Favre from London (originally French based) has inspired us with her beautifully illustrated covers for The New Yorker or Vanity Fair, and Giantstep presented how the maintitle for the OFFF 2018 has emerged. Nice!

When the master speaks

And then there was him! The one everyone was waiting for (the hall at least was super crowded and the queue of people waiting outside was super long): Stefan Sagmeister from Sagmeister & Walsh from New York! The Austrian with the funny accent was amazing. He gave us some hints for becoming happier in life and shared insights about the making of his movie "The Happy Film".

This happened in such a self-ironic, funny, but also very emotional way. You could really connect with him: The sadness, when one of his best friends died during the making of the film, actually brought tears to my eyes. When he fell madly in love under the influence of psychotropic drugs, one was stunned and alienated at the same time.

On top of the world, or in the depths of despair  - he has perfected playing with emotions. And in the end, to make all the OFFF visitors that are more or less stressed by clients a little "happier" he made us all singing together! To Beethoven's "Ode to Joy" we were singing along the world hit song "All My Clients Drive Me Crazy Never Show No Guts At All" ... Thank you, Stefan Sagmeister - that was great!

CONCLUSION - Not as bad as it seems

And that's why, despite all the waiting, the missed talks - we would love to go back to see David Carson and Chris Bjerre's maintitle at OFFF Barcelona 2019 and spend a little quality time with co-workers there. But maybe next year we'll take a folding chair with us to guarantee a more comfortable waiting.

CHEERS and see you soon! Sincerly your DEMODERNS!

DMDRN mixtape #24 by Luis, the Angel