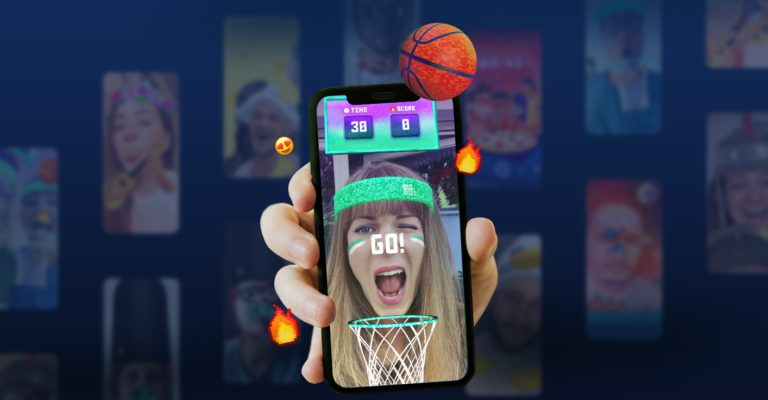 Live, raw and augmented: Social media as the starting point for AR in our daily life.

When Kylie Jenner tweeted that she no longer uses Snapchat after a new update in February 2018, the stock of the social media giant plunged by 7% — a market value of about $1.3 billion. 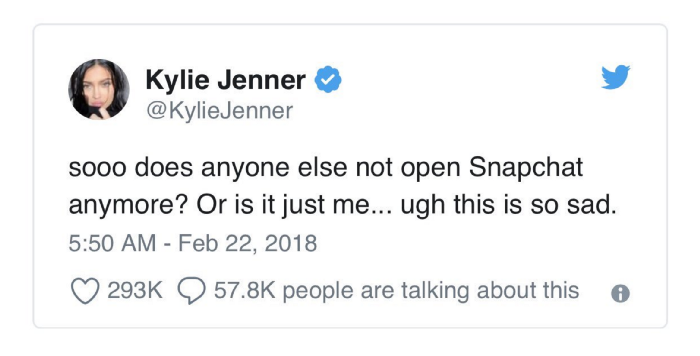 The enormous influence of the Kardashian sister isn’t all that surprising though, considering she appeared on Forbes Billionaires list in March 2019 at age 21, her net worth today is roughly $900 million. Jenners success is even more impressive when compared to those of established brands. It took famous cosmetic brand Bobbi Brown 25 years and L’Oréal’s Lancôme 80 years to break the $1 billion mark. Kylie Cosmetics (@kyliecosmetics) launched just 5 years ago.

But how could Kylie build up such a flourishing venture in such a short time? Certainly, her family tree is not insignificant, but the brand mainly became an e-tail phenomenon thanks to clever social media marketing. Jenner and her crew have a massive following on their social media channels (she counts 184+ Million IG followers today). In her stories she announces product launches, publishes unboxing videos and recounts which shades she wears every day. According to a study by Esteban Ortiz-Ospina, young adults engage with social media on a very high frequency (the average in the OECD countries is close to 90%). So Millennials and the younger Generation Z spend a relatively large part of their time on social media to identify with their idols, feeling as if they are actually taking part in their lives. Given this information, it would be impossible to ignore the connection between Kylie’s social media presence and her rampant business success. As a result, conventional marketing instruments, such as classic advertising or PR, are becoming more and more unpopular, especially with regard to their credibility.

Social media determines trends that go beyond the horizon of contemporary advertisements and visual art.

One of the latest success stories of new social media trends is certainly the face filter. Face filters are everywhere. When I say “filter” I’m referring to the interactive augmented reality (AR) snippets that can be used via the Instagram camera. They are being shared in the platform’s popular Stories function — with 500 million daily users and counting. With just one click from a story, filters are incredibly easy to access.

This symbiosis of social media and augmented reality is called — buzzword incoming — “socialAR”. Early popular examples include Snapchats classic puking rainbow and the dog ears and nose, but beauty and funny filters have conquered the internet for years now. One reason for the latest market boom is that the software used to create these effects is open to the public. And it’s free. Lens Studio (Snapchat) and SparkAR (Facebook and Instagram) allow innovators to create and publish interactive AR effects without the need for background in code or 3D design.

As you might imagine, when the whole world suddenly can program filters, artistic expressions become more and more unique and abstract. Creators play around with different materials and their physical characteristics: wet, soft, elastic, or gaseous to craft filters that are otherworldly in their appearance and behavior. One such creator who blurs the boundaries between physical and digital is Johanna Jaskowska, @johwska. After launching the face filter Beauty3000 she became instantly famous, with her follower count growing to 15K overnight, today she counts more than 700K. 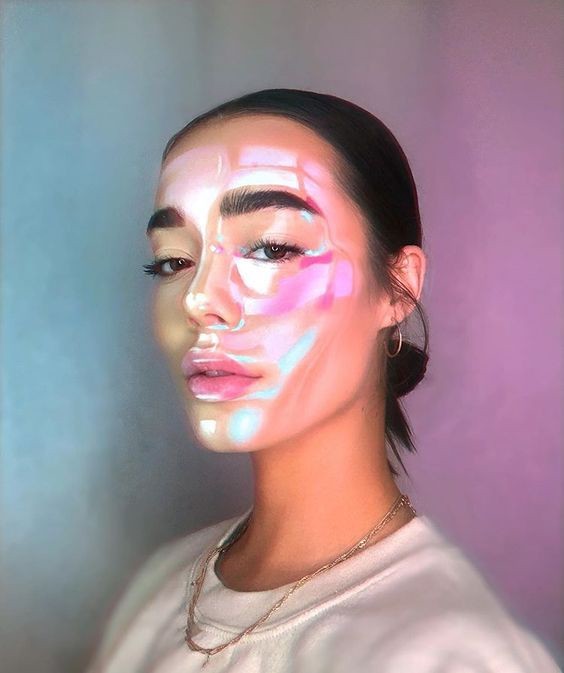 The filter makes you look like a human cyborg, covering the face with a mirror-like shiny layer of plastic. Highlights appear in shimmery turquoise, hot pink, and paperwhite. Since the release of Beauty 3000, Nike has offered Johanna a job as a creative in their HQ, and in her spare time she continues creating face filters for the likes of Billie Eilish and J. Balvin.

With the integration of ever-evolving new hard- and software, AR is much more incorporated in our daily lives. Nearly everyone with an Instagram account and a new-ish smartphone has tried an effect at least once. The possibilities go far beyond the “simple” face filter. Let’s take a closer look:

Face tracking is used to create effects that respond to or mimic someone’s face. Combined with a face mesh, it creates a surface that can detect facial movements and expressions. Adding material creates mask effects like Beauty3000. Objects can be tracked to precise positions on the face, like for example on the chin or the eyes. Thanks to the success of Pokémon Go and the continuous performance improvements on mobile devices, immersive gaming has become increasingly popular. Game filters go viral because they are addictive and fun. In my team, we recently created a series of socialAR games that are being controlled with your head or facial movement. Filter games are fun and hard to put down. Ultimately users are likely to share these experiences with their friends and followers.

But just because the face is the most popular stage for AR, doesn’t mean there aren’t other ways — and places — to utilize such a dynamic and flexible tool. 3D objects can be augmented and placed anywhere into our real world. The items appear to be real because they look like they are anchored to a surface and can play different animations. This is a great way to showcase products from all angles and check out colors and variations. Effects that are triggered when the camera is pointed at an image in the real world use an image tracker. The most promising scenarios using this technology are interactive posters and billboards, or AR packaging extensions that can be accessed easily from your own device.

These are just a few of the many AR use cases and augmented reality is becoming a strong marketing tool across a variety of industries. By 2023, there are 2,4 billion projected AR users — that’s more than 30% of the world’s population.

Immersive formats are also gaining a foothold in the world of e-commerce. With the possibility to virtually try on a pair of shoes before buying or test out a new pair of sunglasses — all from the comfort of your home — AR can be used to remove barriers for potential customers and increase revenue for brands.

Kylie Cosmetics is among the brands that have used AR to supercharge e-commerce with an Instagram filter that enables customers to try on seven different shades of lipstick from their lip kits. The filter is a perfect solution for many of their customers as the products can only be ordered online or bought in pop-up stores in the USA. Using the filter people can test which lipstick colour would suit them best regardless of where they are ordering from — no pop-up shop necessary. 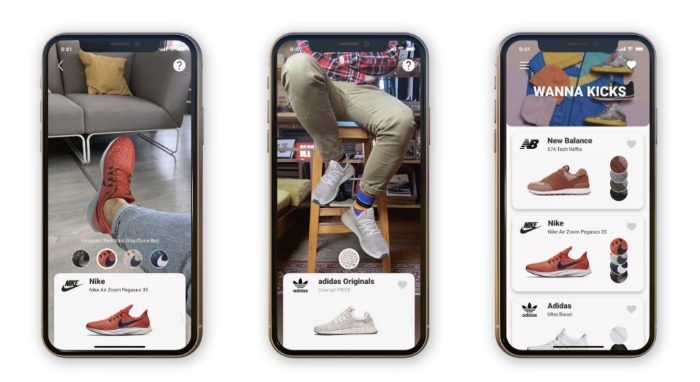 AR Shopping let’s you virtually try on a pair of shoes. Image from techcrunch.

„The magic of AR creates a radically different kind of shopping experience that goes above and beyond what digital or physical can offer alone.“

Good question. We live in a world that is moving more and more online, and COVID 19 for sure is accelerating this transition. People’s online personas gain more value every day. We can create looks that would hardly be possible in reality — fast and adaptably with one click. The next stage? Digital clothing. Johanna Jaskowska just sold her first digital-only clothing item. Yes, you read that right. The dress does not exist physically and she sold it for $9500. 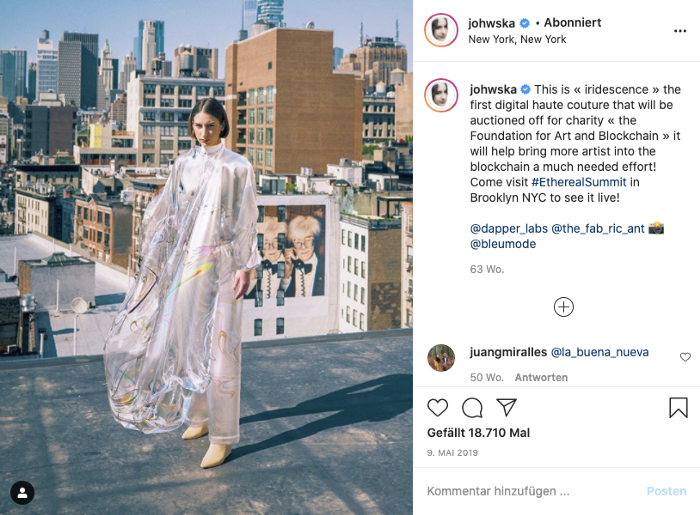 Digital fashion is nothing new for us, I remember I spent quite some time dressing up my Sims when I was younger and today, we even dress our miniature representations in designer clothes (like when Epic and Nike teamed-up, creating Air Jordan branded Fortnite skins). Using AR, we can overlay virtual pieces not only on our avatars but on our own bodies, providing social media society with new looks without having to actually produce physical garments.

Is this the future? Could be I’d say. It’s no secret that our fast fashion habit is causing irreparable damage on our planet. If digital clothing helps fighting back, why not? I personally also see great potential in augmented reality initiating a bigger social rethinking. It fits into a time in which especially younger generations are freeing themselves from what society imposes on them: gender clichés, beauty ideals, or racist attributions. It’s a tool helping everyone who longs for self-determination. Of course a central question to ask ourselves is to what extent our digital identity still represent our physical self — are we distorting reality too much wearing masks and filters? It’s all a matter of perception. One thing is certain though, augmented reality will continue to change our lives for the long run.

The original article has been published on Medium.

The importance of immersive character design and world-building