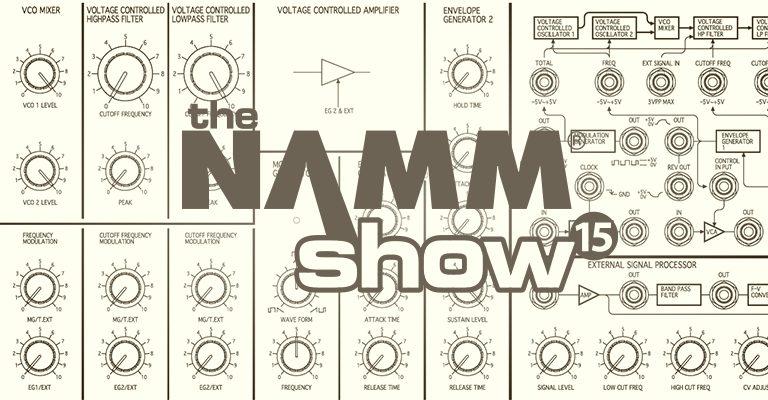 As a designer and interface addict, for reasons of curiosity alone, I like to keep up to date with the operating concepts of the new toys that my music production and sound design colleagues are using. Who are the rock stars of the scene and which Davids are positioning themselves with new ideas for tools and processes against the Goliaths of the industry?

Musicians like to play and try out new things. And it's not seldom that a playfully occurring mistake becomes an essential aspect of the end product. Successful tools therefore always offer a balance between a critical mass of complexity and a low entry threshold, which offer the prospect of good usability. Or in other words, I only use a tool if it's fun and I can improve in small, tangible steps, thereby achieving impressive results. Mastering a skill is very deeply rooted in our culture, not just as the drive behind our own development but also as a form of self-expression. There is nothing more boring than pure perfection in music, but striving for it creates the field of tension which captures a little of the magic that makes great musicians great.

For quite some time now there has been a clearly visible trend: tools are moving away from the über-workstation that combines all functions and towards specialised, easily understandable monothematic tools and modules, which shine in precisely their discipline and therefore stand out in terms of quality. However, we shouldn't completely lose sight of the use cases. On the one hand the sound designers in the studio, who are still soldering by hand and are on intimate terms with every nuance of sound synthesis, versus the singer-songwriter who just wants to play a rough riff on a new idea in their tour bus to capture the moment. Certainly two completely different demands on each device.

A small company from Sweden called Teenage Engineering, which admittedly already had me wrapped round their little fingers with the OP-1, has, with the Pocket Operator, now brought out three instruments for the pocket, which somehow look like a mix between a simple pocket calculator and a mousetrap. They are available in three variations: rhythm (beats), sub (basslines) and factory (melody). And with their 23 buttons and 2 knobs they look like a whole lot of fun. The user operates the devices with the help of a series of curious illustrations, reminiscent of old LCD games. There is also a case available to protect it, which only further contributes to its resemblance to the typical Braun pocket calculator.

The Arturia BeatStep Pro Sequencer is – not only – aimed at users of analogue vintage sound generators and synthesizers. Due to its clear layout, functional components are easy to differentiate. Visually it's a mix between the Revox tape recorder and the Akai MPC. This austere design paired with the playfulness of this open platform cause the haptic intervention into the music to become a sensory act. Wanting to have something in our hands is likely also the reason for the trend of going back to devices with cables, which feel more sturdy in general, not just when being used. For clarification purposes the French manufacturers have recorded a Video.

The LinnStrument by the legendary electronics pioneer Roger Linn and the Novation Launch Pad Pro are two new representatives of a type of instrument that is trying to break new ground in the way in which it deals with samples and tones. While the classic key structuring dictated the technical parameters of the sound generated, these instruments break away from the traditional structure and change the options available according to the situation. The influence on the changing the generated signal is also made full use of and quite a lot of practice is required to really control the parameters. And somehow it brings back memories of the Atari Hotz Box.

In the "behind glass" category there is a lot going on. And the AudioBus seems to be establishing itself as the standard for communication between apps. Out of the many releases there are three candidates that particularly stand out. The Wavemachine Labs Auria Pro, the Akai iMPC Pro and the Waldorf Attack drum synth.

Even if skeuomorphism isn't all the rage in interface design, the interface of the Auria is well-structured and practical. And as a 48-track recorder the iPad becomes a real production alternative. The editing and mastering functions are tailored to professional users familiar with the studio processes. The app, however, only offers the option of working with audio tracks. For a touch application the interface tries relatively few attempts at gesture control and is oriented on the operating paradigms of its big desktop brothers.

The iMPC Pro certainly has a major reputation to live up to. The age-old MPC (Music Production Center, 1988) was THE mobile production studio and set standards for a generation of musicians with its clear, indestructible interface. The iMPC borrows noticeably in terms of visuals, without looking too naturalistic. The paradigms and design are well interpreted and with the MPC Element there is even a haptic controller, reviving the old rubber pad feeling. The direct sampling and the creation of pad banks is disproportionately more convenient than with the original LC display and its very limited sample memory. 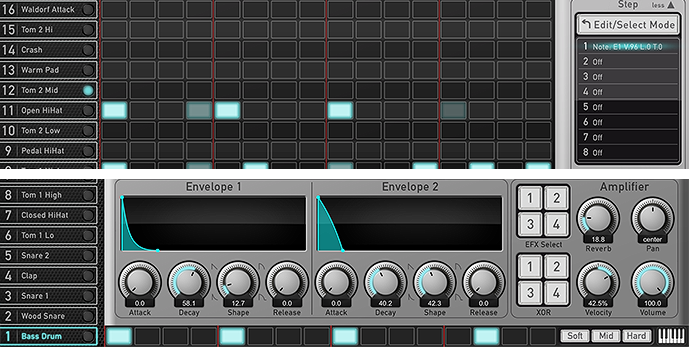 The Attack Plugin by Waldorf set benchmarks with its sound quality and editing options. And this product has now made it onto the iPad. Without a doubt, the look of the interface can be described as old-school or "so 2000". But this should probably be construed as a conscious reference to the original plugin from 2001. Using it is fun. All the instruments are located on the left edge and can thereby be edited in the sound mode and played in the pattern mode. The handling of the created patterns in song mode is practical, if not the most attractive. You can playfully put together an arrangement from your own created patterns. As a bonus there is also a Phrase Vocoder, which chops voice elements or vocal recordings into rhythmic samples.

But in addition to the virtual instruments there is also a flood of new authentic analogue synthies, which – as I already mentioned at the beginning – fully concentrate on their core competency: generating fantastic, real sounds. The difference between digital and analogue lies in the synthesis here: while the digital synthesis has to simulate all vibrations and overtones, in the analogue synthesis the tones are created by oscillating electrical circuits, which can be influenced and modulated by various filters before eventually setting the speaker in motion. This leads to considerably warmer, more intense tones, with a wide spectrum of resonances and mutually dependent interferences: basically more vibrant sounds. These treasures come with a large number of twist and slide controls, which invite the user to experiment and play around.

The great thing is that every instrument has its own character and own operating features. Fortunately, this character is also reflected in the lack of plastic used to make them. Wood, aluminium and rubber are the materials of choice again, as should be the case for a proper music instrument. 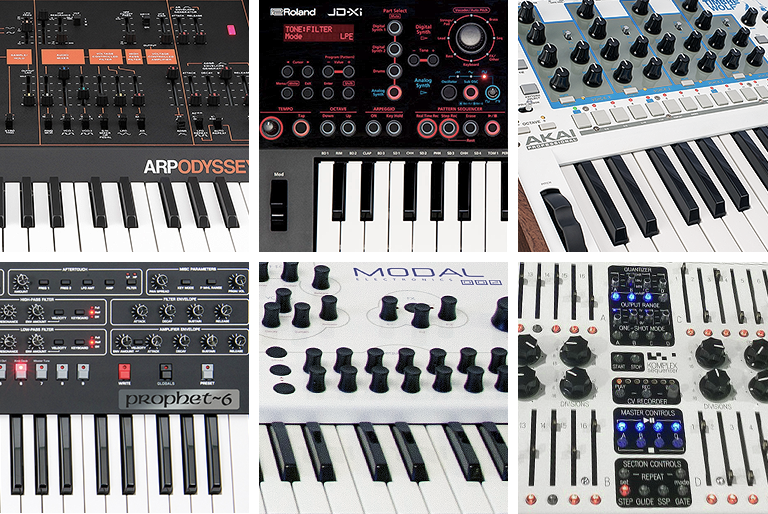 Examples from this growing genre include the reissuing of the legendary Korg ARP Odyssey, the digital-analogue Roland JD-Xi, the wonderful Akai Pro Timbre Wolf, the dream of every electrical engineer: the Dave Smith Instruments Prophet 6, the extra-terrestrial Modal Electronics 002 and the monster Koma Elektronik Komplex. It's definitely worth checking out the sound samples on each of the company's websites.

The hipster amongst the synthies: the Ploytec πλ² Leukos Micro-Synth. Not much bigger than a matchbox and yet still a fully-fledged digital-analogue synthesizer with iPad Editor. Overall still very rough around the edges, but that's exactly what makes the challenge of getting to grips with it so appealing.

The tool determines the path. And has a significant influence on the creative process of a production. We'll just have to wait and see which of these concepts actually become popular amongst the discerning clientele of composers and producers. Perhaps we'll soon be hearing even more from one or two of them.


And one more small tip: Avid has released the free "Pro Tools First" introductory version of its Pro Tools, which is pretty much an industry standard and is used in all recording studios worth their salt. Try it out: http://apps.avid.com/ProToolsFirst/