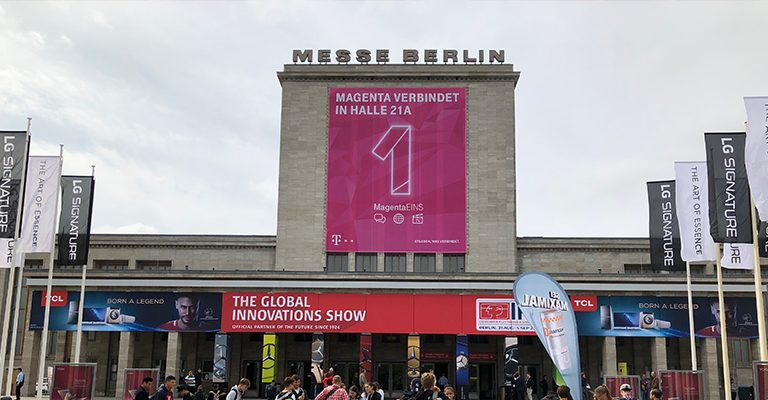 1.800 exhibitors from far more than 100 countries on approximately 160.000 square meters: that is the IFA Berlin. The international exhibition had a lot to offer. Steam cabinets, light art and Google Home in XXL - big players like Samsung, Google and Sony presented new products and trends at the Berlin Convention Center. Checking out the latest tech is all well and good, but we had other reasons to be at IFA as well…

Probably the most conspicuous booth was the one designed by the Cologne based agency Meiré und Meiré for Deutsche Telekom, which also happened to hold a few of our latest projects. In Hall 21, the biggest German telephone company covered in the slogan "Magenta Connects" an area of round about 3.000 square meters - everything in magenta for sure. Probably the most important spots for us have been first of all the interactive Telekom 5G Race, which we developed for the booth and which could hardly be overseen on a screen six meters high. And second the PINBALL Game: Yes, exactly, we have brought the good old pinball in digital form back to life for Deutsche Telekom. The goal of both installations: To make Telekom customers or those who want to become one make aware of the advantages of 5G and MagentaEINS in a playful and virtual manner. 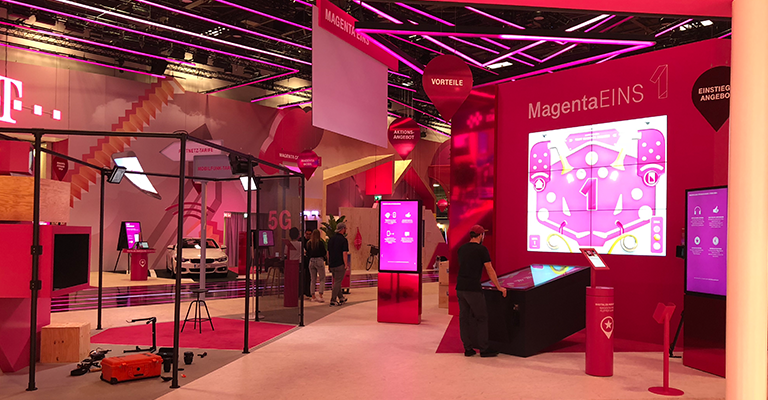 The Telekom 5G race - the next revolution in the mobile network

The 5G Race, which was displayed on a 4x6 meter LED wall, brought the visitors closer to the topics of the new, improved and faster Telekom net through a racing competition in a future smart city. Up to five players were able to register with a smartphone controller in order to command the racers remotely on the screen. During the game, along with obstacles and speed tracks, different power-ups illustrating the key benefits of the 5G technology had to be collected for earning position and winning the competition.

Another installation, the digital pinball, brought the players closer to the topics of the mobile phone contract MagentaEINS. Here, the players could play on two different screens: The goal was to catapult the ball from the lower, more conventional pinball area into the upper area. It was displayed on a 3x2 array of LED screens, allowing the player to unlock as many MagentaEINS advantages as possible on a wall while collecting as many points as possible.

And because it has been this nice, here are a few highlights from the booth of Telekom at the IFA Berlin! Incidentally, the booth and for sure our two installations have been a fully success - even Stromberg himself aka Christoph Maria Herbst came by to visit the booth.

A detailed case and a case film will follow soon  - stay tuned.

TV show highlights in autumn - when it's getting cold outside

AR in B2B: Revolution of trading