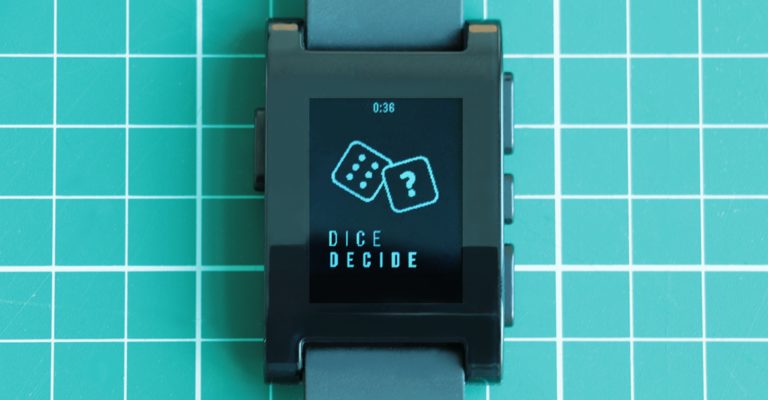 At 99 US dollars it is relatively inexpensive compared to the Apple watch, is not only intended for use with iOS smartphones, and is targeting a different niche with its design.

Which was reason enough for us to remove all friendship bracelets from our wrists and make space for the Pebble watch. After working on the concept our Dice Decide app was established and the technical implementation started rolling.

We went for the CloudPebble IDE – Pebble's in-house and cloud-based online editor for Watchapp development in the browser. This meant that we saved ourselves having to set up the Pebble SDK and were able to get started right away.

The CloudPebble IDE was used with the Pebble SDK version 2.0. This version also supports the PebbleKit JavaScript framework, but we decided on the good, old C. The thought of creating the app in pure C promised digital nostalgia and a challenge at the same time.

We have often had the problem that our Watchapp crashes or the whole Pebble watch rebooted. It took a few console outputs until we realised that we had been overloading the "little" Pebble with too much data. So we paid tribute to our digital nostalgia, by using a bit of memory management. This meant searching and clearing the code for possible bottlenecks, which caused memory leaks, in order to free up memory.

Reacting to and reading the Pebble accelerometer also took up quite a bit of time. Here the focus was on fine tuning the right sensitivity so the accelerometer starts at the right time in order to create the desired user experience.

From both a conceptual and a technical perspective our Dice Decide app helped us to get a glimpse of smartwatch developments. We believe that smartwatches will bring new and exciting interaction opportunities. That's why we're looking forward to developing further watch apps and finally being able to test the upcoming Apple watch.