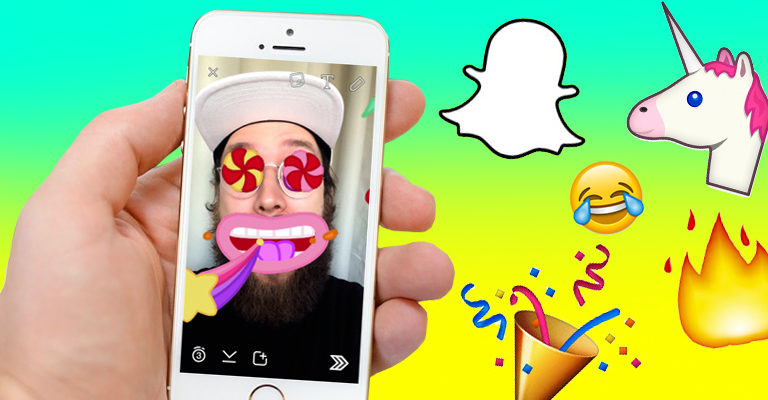 We’re living in an exciting, fast-paced time in which our lives are constantly being steamrollered by the advancements of digitalisation. Both in our jobs and our free time. It feels like new devices and apps are shooting up like mushrooms every hour, often offering a disruptive substitute to our daily “challenges” like communication, dating, transport or even distraction.

Sometimes the apps and platforms aren’t necessarily disruptive. But nor do they have any discernible added value. Yet their usage and popularity are currently being catapulted into spheres beyond our wildest imagination: just watching the developments from afar can be mindboggling.

Whatever the case, now that the German market, following the huge Instagram hype, is also starting to celebrate Snapchat, it seems like it’s high time to delve deeper into the topic.

Similar to the American app Yo, I initially filed Snapchat away into my “something for a rainy day” drawer. Yet another start-up product that’s causing a stir with its rapid ascent, fast monetisation (via data or ads) and the subsequent sale to an American media giant, I thought. Time to face the truth.

After briefly asking around the team it turns out that although everyone is represented on the standard portals like Twitter, Facebook, Instagram and Pinterest, for the (significant) majority, Snapchat is absolute uncharted territory. But regardless of all that, I bite the bullet, download the app and dive right in. It quickly becomes clear what it’s all about: yourself (provided that you’re an active user). In times of selfies, the ever-so attractive duckface and the newly created digital influencer profession, this isn’t really surprising. So is Snapchat, as a video/photo messaging app, merely another stage for self-promotion and presentation? Or simply just a successful reaction to the current content conversion of text and image into video? 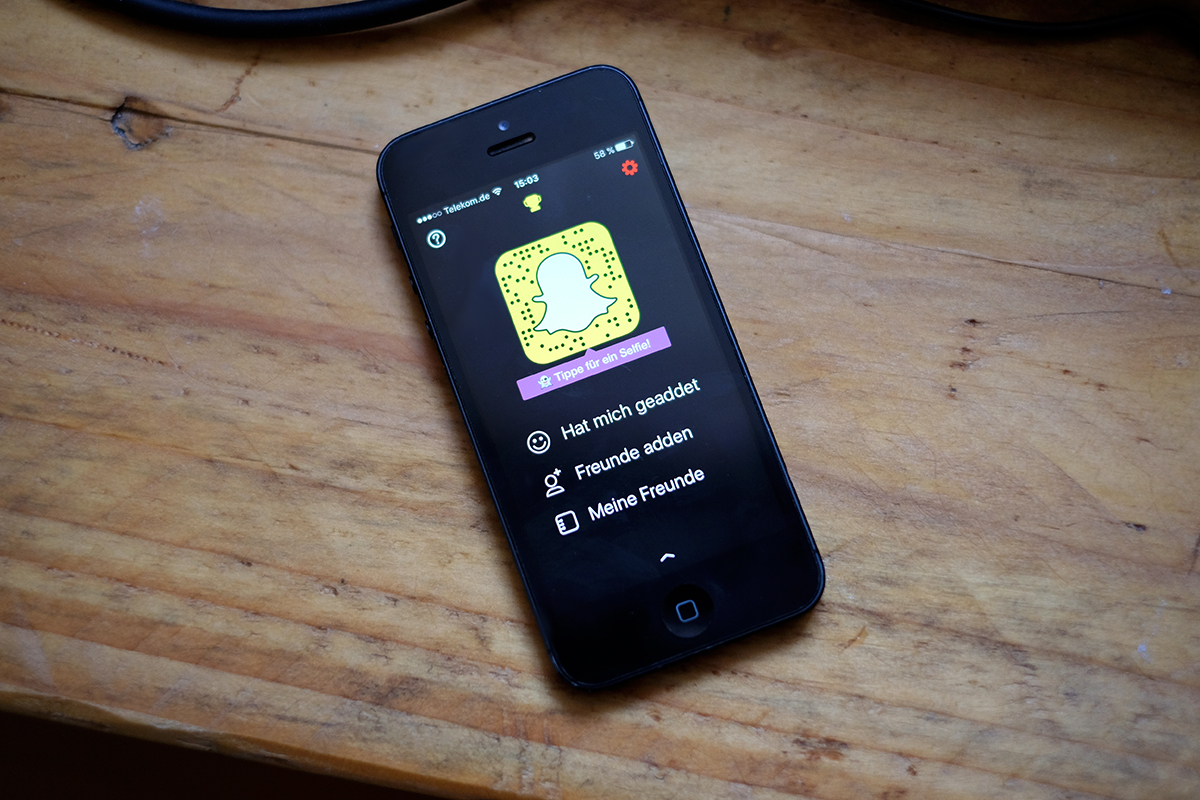 Using the tap & hold function on the screen, Snapchat enables its users to make short videos (or take photos). Very intuitively, quickly and one after another. In this way, in just a few steps you can share your daily routine with individual or multiple selected users privately, or directly with all of your followers. You also have the option of slapping one of the many face-recognition filters onto your face (which was my personal highlight, as you will see later).

It all sounds logical, but somehow also quite like Instagram. But only almost, because the so-called “story” is only available for a maximum of 24 hours before automatically disappearing. And that’s precisely the point. It is this aspect that ensures that all those anodyne arrangements of a coffee cup on an old wooden table next to an exotic pot plant complete with draped Swedish designer scarf lose their relevance.

Snapchat is the little rebellious punk brother to its insecure, bespectacled, architecture-studying sibling. Wilder, naiver and somehow more honest. Or the honest-to-goodness, but often somewhat undiplomatic buddy, who slaps you round the face whenever your head is too high up in the clouds, bringing you back down to earth with a bang. And finally there is a platform that doesn’t allow post-production tweaks like soft focus and airbrushing. Who will dare to bare?! Incidentally, this results in users of the same or similar social strata being more likely to watch each other than anyone else. . In comparison to Instagram, snaps of stars and starlets are not quite so popular, as the current statistics show. The lifestyles they portray are apparently too far removed and inaccessible.

In the interests of anthropological research, I start by adding the “who’s who” of the digital Snapchat clique to my contacts list and religiously immerse myself in their stories every evening, all as a passive consumer so to speak. For seven whole days. That’s the plan. Just like on Instagram, two main user groups quickly become apparent. Hobby users and (partly commercial) bloggers (– okay, and celebrities). So basically those who simply share their everyday experiences at school, at work or at parties, and those whose tangible digital lifestyle, including all of their sponsored all-expenses-paid trips and product freebies make their way into the videos as native-ads – but the users still somehow manage to pass as ordinary mortals.

In addition there’s a clan of currently 17 companies, including VICE, National Geographic and Buzzfeed which are providing users with stories in the form of articles (with videos or photos). Like in an e-book, you can explore the contents via swipe and scroll. During certain events (NBA games, NFL ProBowl, presidential campaigns, Shark Week, etc.) the live function, which allows the users to explore Snapchat as a real-time channel, also comes into force.

With 70% of its users being female, the topics covered on Snapchat seem to be limited to the stereotypical pattern. Shopping, selfies, Starbucks. None of that is really my cup of tea (or should I say coffee?!), even though I now know that branches of Starbucks are regarded as a post-modern hotspot for young girls. And when you think it can’t get any worse, it does: one evening I happen to observe two girls sitting opposite each other in a restaurant, simultaneously snapchatting about their food. What else? “I’m eating a Caesar salad right now. Mmmh, and what about you?” Mmmh, exactly. Probably vegan – i.e. without the chicken. I feel like I’m trapped in a bottomless pit of underage narcissist neurotics. An intellectual one-way street with no way out. Perhaps I’m just a covert old-conservative whinger, who simply can’t get to grips with the whole idea of magnifying insignificant everyday situations. (It’s a Caesar salad – so what?!)

Sadly, there are no surprises over the next few days. Instead I gradually start worrying about the interest horizons of people online and those who have yet to join the party. The more stories I watch, the more certain I become that consumerism and materialism not only serve to satisfy one’s own needs, but rather fall into the category of social desirability. While High5-Gina* snapchats from high-priced restaurants on pretty much a daily basis, NovaLamaLove* seems to be going to the hairdresser’s or for an eyelash extension treatment every other day. Hair on fleek and all that. And right in the middle of it all is my young cousin, who seems to have converted her smartphone into a mirror so she can emulate her role models. Wow.

After a hardcore week of consistent “Snapchat & chill” evenings, everything became a lot clearer to me. There’s a reason why the app nearly passed me by. Despite the scary figures of 100 million daily active users and six billion views per day, Snapchat is more popular among the younger generations. Perhaps because the need of younger people to communicate is a lot bigger. Perhaps also because the behaviour of the Millennials (Digital Natives) and their approach to social media is very different to the behaviour of those who believe dial-up modems and WinRar to be relics from the era of Napoleon and Robespierre (Young Digitals). For whatever reasons – there is a certain gap that is separating the “more mature” Facebook generation from the young Snapchat generation.

To build the bridge in a corporate communications direction: as a result of the masses of new social messaging apps that are randomly (or not, as the case may be) flushed into our feeds on a daily basis, it’s very easy to lose track. Possibly even at the expense of one’s own business.

In my eyes, Snapchat, as an extension of the communication channels, represents an option for interactive storytelling, from which the user experience could also profit. In an era of continuously increasing online consumerism and dwindling retail sales it’s all about offering the consumer added value and experiences. Offline as well as online. Whether it be by means of account takeovers, insights or exclusive contents – with the help of dynamic contents and creative stories, this is an access point where companies could continue and expand the conversation online. Companies like McDonald’s, Taco Bell, but also Calvin Klein and Audi have discovered the joys of Snapchat as an additional communication channel and already put it to use in successful campaigns.

Unfortunately, here in Germany the whole Snapchat craze is all moving quite sluggishly. Although I could envisage, for example in the case of lifestyle brands, a lot more activity or campaigns – in fact, I’d even go as far as to wish for them. As a contrast to the current mainstream monotony and, above all, because there is currently next to no competition on the platform. The magic trick – as so often – is just do it! Don’t calculate everything to death down to the very last detail, but take the bull by the horns and ride off into the sunset with it. Perhaps I’d also use Snapchat as a valid alternative to the platforms we’ve seen so far in the world of product communication – as long as it still left me with enough time between all those selfies and “Follow Me Around….” snaps, of course.

* User names have been disguised to protect the Snapchatters' identities